On Sunday, July 23, branch presidents, Central Board representatives, and guests gathered at the Holiday Inn Oakland Airport to applaud 19 honorees receiving the 2017 Jack London Award. Given biennially, this award recognizes superior and sustained service to the California Writers Club. Also presented was the Ina Coolbrith Award to Bob Isbill of the High Desert Branch for his exemplary service to the entire club. Without the dedication of volunteers such as these, the club would not be able to operate.  Congratulations to the Jack London awardees: 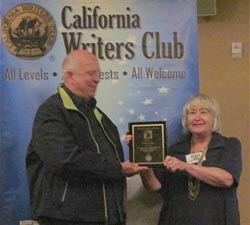 See a full list of awards going back to 1973 here.