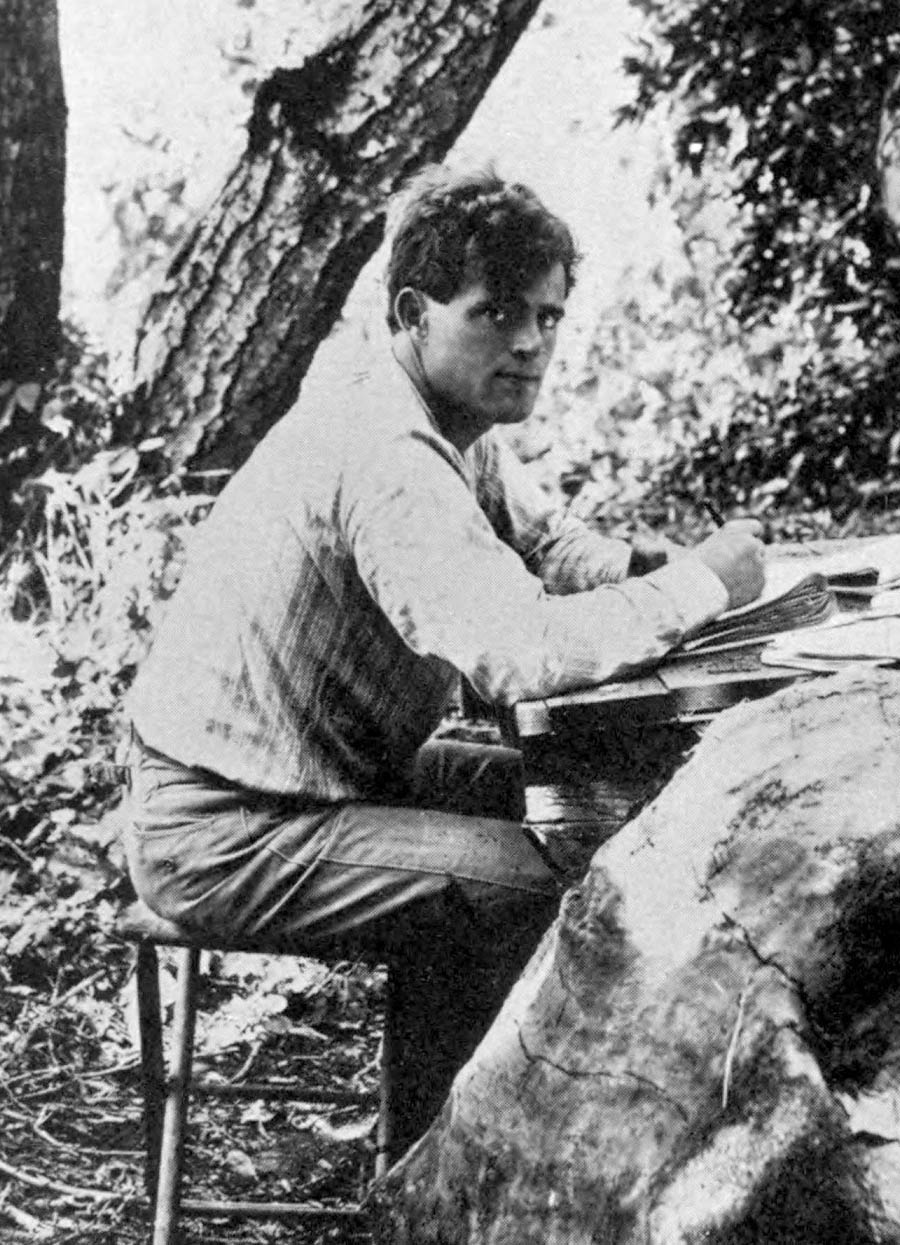 The informal gatherings of Jack London, poet George Sterling and short story writer Herman Whitaker, among others, eventually formed the Press Club of Alameda. In 1909, a faction of the membership split off to form the California Writers Club with Austin Lewis, an English civil libertarian, as the first president. Under the leadership of Dr. William S. Morgan, a quarterly bulletin was started in 1912, and California Writers Club incorporated in 1913, choosing the motto “Sail On!” from Joaquin Miller’s poem, “Columbus.”

The first California Writers Club Conference was held in Oakland in 1941. Today, one-to-three day conferences are held by various Club branches around California. Each attracts from 100 to 400 writers and each conference hosts editors, authors and publishers from all over the United States presenting lectures, workshops, and panel discussions on all aspects of writing. 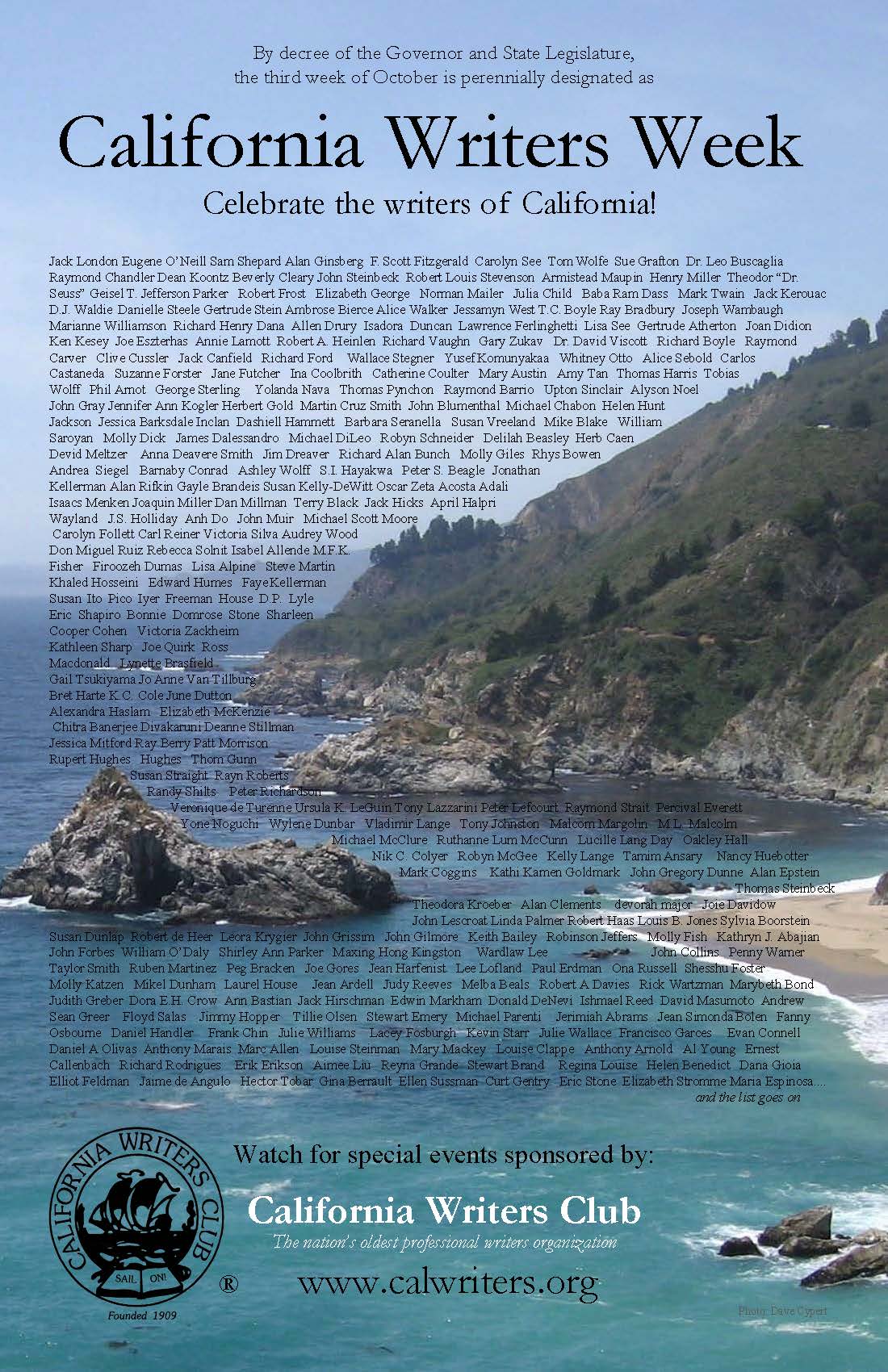 In 2003, the California State Assembly officially declared the third week in October each year as California Writers Week.

We invite all authors and readers to celebrate with us. Check your local branch’s website in October for sponsored events

The following authors were selected for the California Writers Club Joint Legislative Resolution in 2003.

The Story Behind California Writers Week

Our Day in Sacramento

Former CWC President Barbara Truax (holding resolution) with Assemblyman Tim Leslie and Anne Marie Gold, member of the executive board of the California Library Association and head of the Sacramento Library.

Central Board Representatives join Barbara on the Capitol Plaza for a photo op.

WHEREAS, The California Writers Club was founded in 1909, with Jack London, Ina Coolbrith, George Sterling and others as members; and

WHEREAS, The California Writers Club honors all California writers, past and present, and continues to nurture the talents of new writers as well as established authors, and to provide a forum for the sharing of their writing experience, and

WHEREAS, The California Writers Club’s mission is to teach, mentor and encourage all writers for the good of our society; and

WHEREAS, California libraries are the forum where the writing of Californians is preserved and provided to the public, and

WHEREAS, the California Writers Club encourages all California libraries to showcase the works of California writers through displays, author programs and reading clubs; and

WHEREAS, The California Writers Club urges all educational institutions to place more emphasis on developing the writing and reading skills of everyone; and

RESOLVED BY ASSEMBLY MEMBERS TIM LESLIE, JOSEPH CANCIAMILLA, GUY S. HOUSTON, BILL MAZE, GENE MULLIN, JOE NATION, AND PATRICIA WIGGINS AND PRESIDENT PRO TEMPORE OF THE SENATE JOHN L. BURTON AND SENATORS NELL SOTO AND JACKIE SPEIER, That they recognize the third week in October as California Writers Week, and encourage the people of the State of California to reflect upon the contributions that California writers have made to humankind.

Here’s an excerpt from Oaklandish suggesting that Joaquin Miller was Oakland’s first hipster. 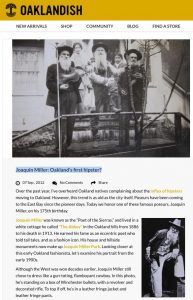 Over the past year, I’ve overheard Oakland natives complaining about the influx of hipsters moving to Oakland. However, this trend is as old as the city itself. Poseurs have been coming to the East Bay since the pioneer days. Today we honor one of these famous poseurs, Joaquin Miller, on his 175th birthday.

Although the West was won decades earlier, Joaquin Miller still chose to dress like a gun-toting, flamboyant cowboy. In this photo, he’s standing on a box of Winchester bullets, with a revolver and decorated rifle. To top if off, he’s in a leather fringe jacket and leather fringe pants.Joaquin Miller was known as the “Poet of the Sierras,” and lived in a white cottage he called “The Abbey” in the Oakland hills from 1886 to his death in 1913. He earned his fame as an eccentric poet who told tall tales, and as a fashion icon. His house and hillside monuments now make up Joaquin Miller Park. Looking closer at this early Oakland fashionista, let’s examine his portrait from the early 1900s. 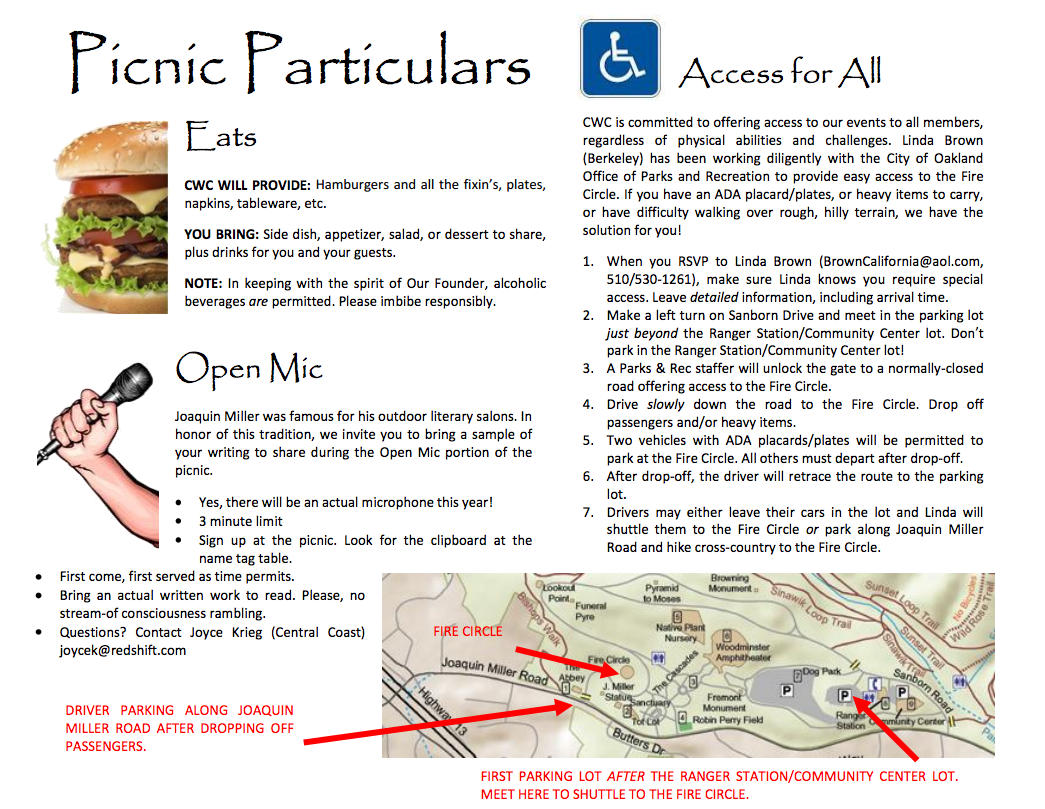 The California Writers Club archives its historic original papers at the Bancroft Library, UC Berkeley, Berkeley, CA, one of the largest and most heavily used libraries of manuscripts, rare books, and unique items in the United States.

The collection contains club correspondence, meeting minutes, photographs, scrapbooks, and clippings, and is stored part onsite, part offsite. Advance notice is required for use. The CWC marked its centennial by presenting a time capsule recording the changes unfolding in the world of publishing. It is scheduled to be opened in 2035 in commemoration of Mark Twain’s bicentennial.

The Bancroft additionally maintains papers of early California writers associated with the CWC, among them Gertrude Atherton, Ina Coolbrith, and Jack London.

For information about accessing these resources, visit http://bancroft.berkeley.edu, email bancref@library.berkeley.edu, or phone 510-642-6481.

Behind him lay the gray Azores,
Behind the Gates of Hercules;
Before him not the ghost of shores,
Before him only shoreless seas.
The good mate said: “Now must we pray,
For lo! the very stars are gone.
Brave Adm’r’l, speak; what shall I say?”
“Why, say: ‘Sail on! sail on! and on!’”

My men grow mutinous day by day;
My men grow ghastly wan and weak.”
The stout mate thought of home;
a spray Of salt wave washed his swarthy cheek.
“What shall I say, brave Adm’r’l say,
If we sight naught but seas at dawn?”
“Why you shall say, at break of day:
‘Sail on! sail on! and on!’”

They sailed and sailed, as winds might blow,
Until at last the blanched mate said:
“Why, now not even God would know
Should I and all my men fall dead.
These very winds forget their way,
For God from these dread seas is gone.
Now speak, brave Adm’r’l; speak and say”
He said: “Sail on! sail on!, and on!”

They sailed, they sailed, then spake the mate:
“This mad sea shows his teeth to-night;
He curls his lips, he lies in wait,
With lifted teeth, as if to bite:
Brave Adm’r’l, say but one good word;
What shall we do when hope is gone?”
The words leapt like a leaping sword:
“Sail on! sail on! sail on! and on!”

Then, pale and worn, he kept his deck,
And peered through darkness.
Ah, that night Of all dark nights!
And then a speck —
A light! a light! a light! a light!
It grew, a starlit flag unfurled!
It grew to be Time’s burst of dawn.
He gained a world; he gave that world
Its grandest lesson: “On! sail on.”