On Saturday, September 29, 2018, over 60 representatives from twelve of the fourteen Northern California CWC branches came together at National University in Pleasant Hill for an informative day on “Building Better Branches.”

The goals set for this conference were to help CWC members (especially board members) fulfill their individual branch roles as well as find new ways to improve their branch and/or to help ‘grow’ the branch in a better, more positive way.

The day began with branches sharing the accomplishments and challenges. Deborah ‘Jordan’ Bernal, past president of Tri-Valley Writers, gave the “The (Relatively) Small Branch that Roars!” keynote. Then attendees broke into groups for concurrent sessions on “Keeping Volunteers Committed and Motivated,” “Attracting New Members,” and “Conducting Contests and Workshops.” After lunch the attendees broke into groups based on volunteer job descriptions and attendees were able to share best practices and network with their peers. The day wrapped with a complete group “Taking it Home” idea sharing.

The NorCal Group hosted the 2016 Building Better Branches Leadership Conference at DeVry University in Fremont, CA. Of the twelve NorCal branches, we had members from ten of the branches, and one member from Inland Empire in Southern California; a total of 68 in all.

The goals set for this conference were to help CWC members (especially board members) fulfill their individual branch roles as well as find new ways to improve their branch and/or to help ‘grow’ the branch in a better, more positive way.

Our keynote speaker, Sandy Baker from Redwood Writers, a branch of over three hundred members in Santa Rosa, gave an inspiring talk called ‘Secrets for Attracting and Nurturing Members’.   For many of us branch board members this was a true highlight, as she was able to share positive examples of how to educate CWC members at all levels of writing expertise as well as in publishing and marketing of their work.  We also learned the benefits of offering ‘member-only’ programs to encourage not only new writers to join but to celebrate the accomplishments of our member authors.

Our Peer-to-Peer Group sessions were varied, as there were many separate roles of which to cover.  The greatest overall interest, though, was in how to bring more volunteers into the fold and include more into our board meetings.

The afternoon track sessions continued our discourse and were led by (1) Karma Bennett of Berkeley Branch on Generation Text – Attracting Younger Members; (2) Kim Edwards of the Sacramento Branch on Motivating Volunteers and Keeping Them Committed; and (3) Jordan Bernal from Tri-Valley Branch who spoke on the ‘Five Dysfunctions of a Team and How to Overcome Them’.  All gave us ways to provide leadership and to help direct the creative types within our branches.

Very positive feedback was received from all with the majority requesting the leadership conference be put on at least every other year, if not every year.  One of the favorite experiences members shared was the ability to collaborate as a peer group, meeting other CWC members and having the opportunity to network.  It truly was a worthwhile event!

On Saturday, May 3, 2014, a special event for branch leadership was held at DeVry Institute in Fremont. This conference was geared for officers who would be returning for the 2014-15 term and incoming officers, committee chairs and other volunteers, new and returning, as well as members who expressed an interest in becoming more heavily involved in the club. 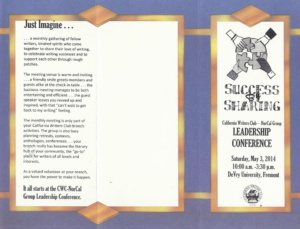