We have switched to an RSVP system for our Zoom meetings. If you’re NOT currently a member of Coastal Dunes CWC, and you’d like to attend our next meeting via Zoom, use our Contact Form to request the Zoom link (put “Zoom link” in the Subject line.) 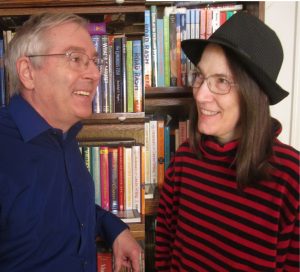 They have been members of the California Writers Club for over 30 years, first with Writers of Kern and now with Coastal Dunes CWC.

As a team, they have written one-act plays, full-length plays, screenplays, teleplays, short stories, and novels.  Their interactive murder mysteries, one-act, and full-length plays have been produced on stage at various venues in Bakersfield.

Their teleplay “Seinfeld:  Good Vibrations” placed among the top 30 of over 1,000 submissions for the Walt Disney Pictures & Television Fellowship Program for 1996-97 (television division).  The script ranked 53rd Place in the Television/Movie Script category of the 1996 Writer’s Digest Writing Competition.

Their work has appeared in Coastal Dunes CWC Anthologies “Across a Distant Shore,” “Shifting Sands,” and “Turning Tides”; and in Writers of Kern “Anthology 2001” and “Anthology II.”

Come join us to hear more from Terry and Carol about their screenwriting adventures.

Our in-person monthly meetings are admission free and held at the: