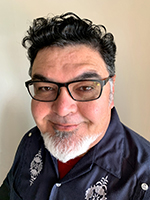 Join us as Jaime Cortez reads and discusses selections from his short story collection, Gordo. Set in a migrant workers camp near Watsonville, California, in the 1970s, the stories, alternately tragic and comical, introduce readers to a cast of rambunctious kids, rebellious adolescents, and the farm workers whose labor powers the mighty agricultural industry of central California while offering a sweet frankness about serious matters: Who belongs to America and how are they treated? How does one learn decency when laborers, grown adults, must fear for their lives just to bring home a paycheck and better their lives? What does the term “all-American” truly mean?

Jaime Cortez is a writer and visual artist based in Watsonville and San Francisco. His fiction, essays, and drawings have appeared in diverse publications that include Kindergarde: Experimental Writing For Children, No Straight Lines(a 40-year compendium of LGBT comics), and Infinite Cities (an experimental atlas of San Francisco, edited by Rebecca Solnit). Cortez often combines humor and tragedy to tell stories of resilient survivors on the margins of the economy, the law, and social acceptability. His debut collection of short stories, Gordo, was published in August 2021 and has garnered glowing reviews from the New York Times, San Francisco Chronicle, and National Public Radio.