The success of CWC is dependent on the dedication of many hardworking members. We recognize exceptional service of our volunteers through two awards.

Periodically, the CWC Central Board bestows the Ina Coolbrith Award to honor a member for exemplary service to CWC and / or the Central Board. 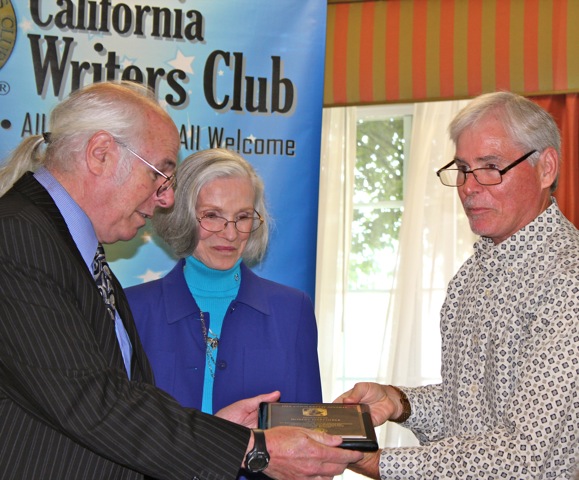 At the July 2014 CWC Central Board Meeting, David George and Nancy Curteman presented the Ina Coolbrith Award to Fremont Branch’s Robert Garfinkle. Bob is a long- time member of California Writer’s Club and a lifetime member. He has dedicated a tremendous amount of his time and talent to CWC and continues the work of 19th/20th -century California poet Ina Coolbrith who encouraged new writers through her literary salons.

His achievements include: Central Board representative for the South Bay branch from 2003-2007, formed the new Fremont Area Writers Branch and served as president, launched the Annual CWC picnic and chaired it for several years, and was on the staff of South Bay Writers’ East of Eden Writer Conference from 2004 to 2008. Springer Publishing recently released his chef d’oeuvre on astronomy, Luna Cognita, (Known Moon)

When asked why he gives so much of his busy life to CWC, he responded, “I enjoy the camaraderie of working with other writers. I guess I just like writers.”

Dave received the Ina Coolbrith Award for serving as the Bylaws and Policy Chair, 2007 through the present. He also established the e-business forum, and wrote the associated operating procedure. He founded the NorCal Group of the CWC, a northern California regional association of branches intent upon promoting Club interests, addressing branch leadership needs, and augmenting members’ interest in writing. He chaired NorCal for its initial three years, and he conceived of and established the Publishing Pathways program, a resource for new writers faced with myriad publishing questions and dozens of pitfalls when wanting to publish their books. He created and developed the Literary Review, and serves as its managing editor.

After numerous credits accumulated in majors from engineering through a political science and pre-law curriculum at several Midwest universities, Dave earned a BS in Business Management from San Jose State. With work, a similar path of various employments ended his career in Aerospace middle management with Ford Aerospace then Loral Systems. His writing career began late in this journey, only after, he would say, sufficient experience to know what and why he was putting to paper. He has written about 20 short stories, published a dozen or more, and has completed the first draft of his first novel, Ordinary Times. Dave’s credo with regard to writing goes something like this: “Live before you write. Words belong to any of us but stories are the product of life.”

An instructor at San Jose State University, Kelly received the Ina Coolbrith Award for her work editing the fifth edition of West Winds Centennial, a collection of poetry, fiction, and nonfiction by members of the California Writers Club. The first West Winds, a hardcover collection of fiction, was published in 1914 and illustrated by California artists. Follow-up editions were published in 1925, 1931, and 1989. West Winds Centennial is the fifth edition.

Kelly has been an active member of CWC since 2007. She co-directed the East of Eden Writers Conference in 2008 with fellow CWC member Edie Matthews. It drew 300 attendees, and featured workshops, agents, publishers, and Pulitzer Prize-winner Jane Smiley. After a successful career in technical writing, she started teaching technical writing in 1999. She earned her MFA in 2005 and currently teaches creative and technical writing. She is also a past director of the Center for Literary Arts, an organization that brings noted authors to campus, and is present director of Writing Programs at San Jose State University.

Joyce considers her biggest and most important CWC achievement to be rekindling awareness of our connection to Joaquin Miller Park in Oakland, of the planting of Writers Memorial Grove, and of the construction of the Cascades and Woodminster Amphitheater. This impressive CWC project had almost been lost in the mists of time until Joyce did her own research and brought it to the attention of the Central Board and to the general membership in The Bulletin. Thanks to her efforts, CWC now has a permanent display commemorating our centennial at the ranger station at Joaquin Miller Park.

Joyce was not even a member of California Writers Club when she agreed to help the Central Coast branch with their newsletter in October 2004. Since then, Joyce has joined CWC and has held almost every office and committee chair at her branch: newsletter editor, membership chair, program chair, workshop chair, and treasurer. She culminated her career with Central Coast by serving as president in 2011-2012, and continues to serve as her branch’s Central Board representative. Also very active at the state level, Joyce currently serves as secretary to the Central Board and chair of the CWC NorCal Group, as well as being editor of the CWC Bulletin.

Casey edited the first CWC branch anthology, Images; was a founding member of the East Sierra branch; and served as president of the California Writers Club corporate central board of directors first from 1999 to 2002 and again from 2008 to 2010. With Barbara Truax, he created and codified the CWC Policies and Procedures.

After 37 years working for the federal government, Casey changed careers in May 1993 to become a full-time freelance writer. His first commercial publication appeared in the January 1969 issue of Electronics World. Since 1993, his articles and photographs have come out in newspapers and several national magazines. He has written scripts for and worked as production manager for television public service announcements. In addition to his writing, he teaches writing and photography workshops

Barbara has served on the Central Board as president, secretary, and membership chair. In 2003, during her presidency, a California State Assembly Legislative Resolution declared the third week of October as “California Writers Week.” In 1999, Barbara and other residents of Marin County formed the CWC Marin branch. In 2010, Marin branch received a Marin County Board of Supervisors Resolution recognizing the third week in October as “California Writers Week.”

Barbara writes short stories, articles and flash fiction. She believes in the durability of the written word, the impact on the reader, and the responsibility of the writer to make the connection. Her favorite quotation: “Planning to write is not writing. Outlining…researching…talking to people about what you’re doing, none of that is writing. Writing is writing.”  — E. L. Doctorow

Every other year, CWC branches may nominate one of their members to receive a Jack London Award in recognition of outstanding service to the organization. 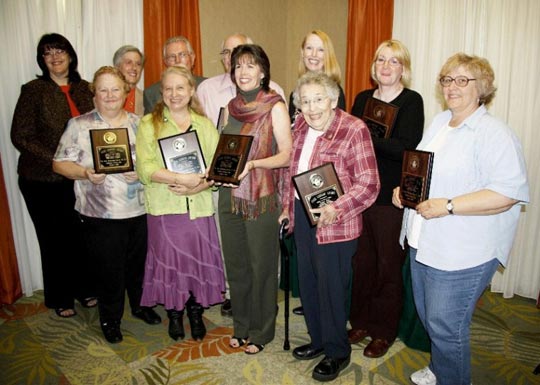 For Service to California Writers Club